Although, the 50th anniversary of the 1972 flood is behind us, the stories of the heroes who stepped up continue. At some point, it is inevitable that history will repeat itself and the weather ingredients will come about again. It is crucial, we don’t forget what happened the evening of June 9, 1972. One of the stories has to do with a Salvation Army officer who was swept away in the flood of 1972.  Vangie O’Neil, current officer with the Salvation Army in the Black Hills area tells the story about Major Medley.

Major Medley and his wife were on their way to the Salvation Army Chapel located on Thunderhead Falls Road. They were bringing their camper and had planned on enjoying the camp. O’Neil continues, ”

“The Medleys were on their way out to enjoy it, and the rain continued to get worse and worse, and they eventually turned around and went back into the city to see how they could help. Mrs. Medley went to work making sandwiches with some of the other ladies and Major took the truck and went down to see where he could help get people out of the rising waters. And he was working on that. He was getting people in the truck. And when the dam broke it, it swept him away and his body was found later the next morning. Meanwhile, all night long, Mrs. Medley continued to make sandwiches, thinking probably something had happened, but not knowing until she got the call. She went in to identify the body and then went right back to work, making sandwiches, which is an incredible story. Hundreds of people volunteered through the Salvation Army to help Rapid City.  People came from all over the Midwest from the Salvation Army to help.”

While researching the 50th Anniversary of the Rapid City Flood, O’Neil came across the fact that a memorial had been established for Major Medley. The pavilion was actually built as an outdoor chapel memorial to Major Medley.

O’Neil explains, “One of the interesting things is that there was no plaque anywhere that I could find. I haven’t found anyone who even remembers. I did find some people who did remember somewhere in their back of their mind that this was a memorial to Major Medley. But they didn’t know anything about a plaque. So in addition to fixing this thing up and getting it back to appropriate shape, we want it to be a true memorial where people will remember because there’s no point in the memorial if it doesn’t help you to remember. So we want to put some plaques and photos on the wall to help people to remember, clean it up, fix it up, and put a little nice altar over there. So it becomes, again, what it was meant to be when they first made this a memorial. They called it a place of solace. And that’s what we want it to be.”

Once the project is finished, approximately within a year, the public is invited to the camp to enjoy the memorial as it was meant to be.

O’Neil says, “We would welcome that in all of this that the city has done to remember the flooding. It’s been very moving for me. I’ve been with Salvation Army for so long. We’ve seen all kinds of disasters, but it’s just so moving. 50 years later for people to remember and to put such importance on remembering and we certainly want to be a part of that.” 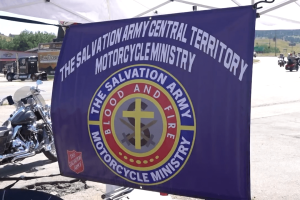 Major Chuck Yockey with the the Salvation Army Motorcycle[...] 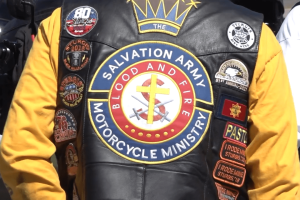