Ries Smith, Dir of Brewing Operations for BlackTooth Brewing in Sheridan, WY, tells how this brewery got its start. Blacktooth Brewery was opened in November 2010. The brewery is named after a local mountain peak in Sheridan. From afar, the peak looks like a black molar.

Beginning as a 10 10-barrel brewery, Blacktooth quickly grew in popularity requiring the brewery to expand to meet increased sales. Smith details the growth, “They went to this expansion in 2015 and they moved from a ten barrel brewhouse to a 30 barrel brewhouse and a 10 barrel 2 vessel to a 30 barrel 4 vessel. So everything went from  10 or 20 barrels of production to 90 and 120 barrels per batch.”

Blacktooth also has a smaller brewery in Cheyenne, WY. Smith explains, “We opened that taproom a couple of years ago, and so our original 10 barrel brewhouse got moved to Cheyenne and they do some small batches there, but otherwise everything is done here in large production scale.”

Smith says that their most popular beer is Saddle Bronc Round. He describes, “It’s an easy drinking, light dark beer, if that makes sense. It’s a very approachable beer. People would say, ‘Well, I don’t like dark beers.’ But we always say, ‘Why don’t you try this one?”

Smith continues describing more of their most popular taps. “We do Wagon Box Wheat, which is very popular in Taprooms, but we don’t really put that in cans as much. We just don’t think it tastes as good in cans. Then we have our Copper Mule, which is a ginger lime cream ale, which is a little bit different, but it’s a good, refreshing little spritzy drink. Our mountain Amber is definitely probably our second most popular beer that one wins awards too. Just like Saddle Bronc. All our beers are award winning.”

Blacktooth also has seasonal beers and also a barrel aged program. Smith elaborates, “We always have our anniversary beer, which is Imperial Scotch Ale that is aged for a year in Wyoming whiskey barrels. And we try to do some more experimenting. It really helps with Cheyenne to do some fun things there. And we’re opening up in Casper too, and getting that brewhouse all set up, so we have the opportunity to do even more fun and innovative stuff.”

Smith describes the atmosphere of the brewery. “Black Tooth is a great place to hang out. There’s always something going on, whether it be bingo night or food trucks. There’s always the locals that are hanging out at the bar. They have their regular spots and it tends to be a good place for people to just, you know, sit back. It’s kind of a chill environment. We do have our events where there’s live music, but usually it’s a good time to just sit and have a beer. The outdoor patio is heated usually, and so even if it’s kind of cool outside, you can see most of the city and right downtown and see the mountains from here. So it’s a good stopover place for sure if you’re coming through.” 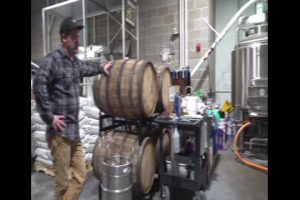