For anyone familiar, new or visiting the area, riding on the Mickelson Trail provides a way people can see and experience the Black Hills, kept slower and quieter than roads because motor vehicles are not allowed on the trail.

Bikers can take enjoy the trail as well, either with a normal pedal bike. If it may be difficult to enjoy Mickelson Trial and the Black Hills due to the hills, an e-bike might be what you’re searching for.

“Pedal assist e-bikes is what we’re going to be talking about,” Tim Rangitsch, owner of Acme Bicycles, says. “That’s a bike that does not have a throttle, the throttle electric bikes where you don’t pedal or don’t have to pedal are technically illegal on the trail. So, the pedal assist e-bikes, what they basically do is add a little extra torque to your effort. On flat ground, you’re not going to really notice a huge difference. But on hills, that added torque makes it so your average speed doesn’t go down. The idea is that on a electric bike, you’ll get the same workout. So you’ve got two hours and you want a workout. You’re a dedicated fitness type person. So, in two hours on an e-bike, you’ll simply go 40 to 50% farther and get the same workout in the same time.”

The added distance that is easily covered by a pedal assist e-bike versus just a pedal bike allows people to see more of the area.

“Very common shuttle is to be dropped off at Crazy Horse and ride down to Hill City,” Rangitsch says. “Well, now with an e-bike, that same person that can do that ride could actually ride from Hill City to Crazy Horse or go all the way to Custer and back. You only need the one vehicle from where you started.”

There are limits to an e-bike though due to them having a battery charge that will eventually run low.

“So, it depends on the weight of the rider. Headwinds can matter too, just like a vehicle,” Rangitsch explains. “If you’re running it on the highest assist setting, you get a little less, but you can expect 25 to 45 miles on a given e-bike. Definitely get out on your bike this summer and ride.”

E-bikes can be used by a wide age range, from 20-year-olds to 80-year-olds, making riding a bike in general easier.

“Yeah, we’ve had people that basically hung up their riding career. You know, at the age of 70, 75 or whatever, and they come try out an electric bike and boom, they’re back to riding again,” Rangitsch says. 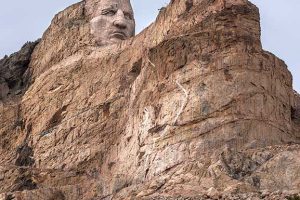 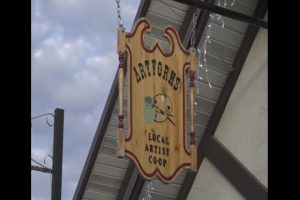 ArtForms Gallery not only lets you view art work, but you can purchase it as well

ArtForms Gallery, which is a little gallery in downtown Hill[...] 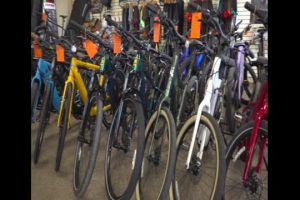