RAPID CITY, S.D. – Every day, evidence from crime scenes in western South Dakota is preserved and processed in Rapid City. After it’s collected at the scene, officers check evidence in to a secure locker.

“When they do that process, it has to be done in a very specific manner. Things have to be packaged in a specific way to help protect the evidence. It has to be labeled correctly. It has to be sealed correctly,” explains Dr. Brendan Matthew, RCPD Forensic Laboratory Director. “The other important thing they will do is they enter the evidence into a data system. In that data system, all the pertinent information associated with that piece of evidence is recorded, including you know, where it was found, who collected it.

Then, the evidence is removed and taken to the warehouse, with each transfer being documented.

“Right now, our evidence warehouse has approximately 50,000 pieces of evidence. So there’s a lot of material, a lot of items to keep track of, to keep safe and keep secure,” Dr. Matthew adds.

Eventually, an official may ask for testing to be done on a piece of evidence, which is what the second floor of the evidence building is for. In the forensic media room, analysis ranges from “very basically just making copies, forensically acceptable copies of that digital media to things like clearing up audio and to creating timeline videos where you’re splicing together video from multiple store fronts to put together a timeline for a potential crime,” according to Dr. Matthew.

Items may need to be examined for fingerprints, which can also be achieved, as Dr. Matthew explains.

“We specialize in the analysis or the finding and identifying fingerprints but we also have the ability to to find and to package what we call trace evidence, which might be hairs and fibers and maybe identifying what we think is some type of biological fluid such as blood.”

More advanced instruments assist in identifying the presence of alcohol or drugs. In the Blood Alcohol Testing (BAC) Lab, a gas chromatography system examines the air above the blood in the vial.

“That system has the ability to take a mixture of chemicals and separate it, and then detect them one at a time as they enter the detector, and in the case of ethanol, we can measure the concentration,” he explains.

In another area, the controlled substance testing lab, Dr. Matthew shows how different substances are tested.

“The chromatography part will take a mixture and separated into its individual components. But now these components enter a chamber in the mass spectrometer and they get hit with a beam of electrons that then cause that molecule to break apart. And to keep it simple, the molecule will break apart the same way every time and essentially form pieces of a puzzle that can be put back together to give you the molecule, and we can we can measure or and determine what those pieces are and compare those pieces to a known database.”

The Rapid City Police Department Forensic Lab is accredited by ANAB – the ANSI National Accreditation Board, which means that field experts regularly review their work and ensure that best practices are being followed. 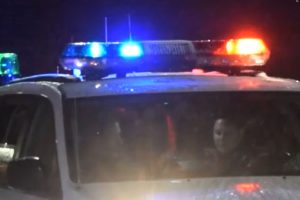 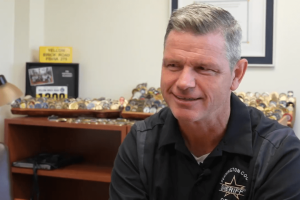