Nathan Venner, owner and brewer of Spearfish Brewing Company built the brewery in 2016.

Venner describes the building of the brewery, “We came into the building project knowing that this brewery was going to take up several thousand square feet in the the lower level. And so we built it. We built the building on purpose to have a brewery. We’ve got really nice floors. We’ve got a really sleek design, a very efficient place to brew beer. We were brewing beer by the end of 2017 and opened to the public in February of 2018.”

As far as running the brewery, Venner elaborates, “It’s been pretty awesome. You just never really know when you’re starting a business, especially with a lot of other breweries and competition in the area. And, you know, it’s kind of just up to the community. We’ve got a ten barrel brewhouse with a bunch of 20 barrel tanks, so we make about 2000 barrels a year. Some of that sold here in house and some of that’s out for distribution around the Black Hills.

Spearfish Brewing Company offers a wide variety of beers. Venner says, “Some of our brands are all kind of featuring American style ales. Our best selling beer in the taproom is the Banner Beers, American Style Light Lager and the Copper Midge, which is an amber lager.”

The kinds of beer offered does rotate. Venner explains, “We have 18 beers on tap. Our flagship beers, we’ve got about six or seven of those are flagship beers, and then others rotate seasonally. So we kind of switch it up. We’ve got beers designed to move in the summertime. And then get replaced by a different beer in the fall. And then that beer comes back the next summer. “

Spearfish Brewing Company is right next door to Red Water Kitchen and offers their menu also as an option.

Venner hopes that the community will come check out the space. “I just think we have a great atmosphere, a really lively patio. We’re right downtown on the main intersection downtown and it’s an easy place to locate and I think that our customer service is top notch.” 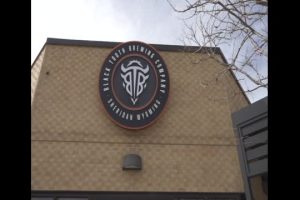 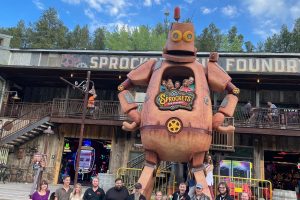