RAPID CITY, S.D. – Mountain biking has grown in popularity in the Black Hills area especially with about 6000 trails, like logging trails, fire trails and railroad trails.

Tim Rangitsch, owner of Acme Bicycles, explains what trails that anyone can access without state permission.

“In the national forest, logging roads, all that stuff is generally open to bicycles, got motorized use year-round. We also have a lot of purpose-built single track, and we’re getting more of that over the last decade, it’s impressive.”

With different skill levels in bikers, trails also have different levels with easy, intermediate and difficult.

“Well, it’s similar to the ski area rating, you know, green, blue or black,” Rangitsch explains. “A green trail would be wider, flatter, fewer obstructions like roots and rocks. Generally, if you can ride a green trail or a blue trail in one location, you could come here and ride a green rail or blue trail.

The Mickelson Trail is one that beginning mountain bikers might be able to ride.

“That’s even easier. That’s a rail trail, and that’s an even easier thing than a mountain bike trail by far,” Rangitsch says.

He also explains the three different types of bikes that can be used,

“You basically have like a comfort bike or a hybrid bike, and that’s more for around town, the rail trails, use it to get to work, take it when you go to a campground and ride the campground, that kind of thing. Some real mountain bike would have full suspension and some that are called a hard tail where it has no suspension in the rear, but the luggier tires and the disk brakes, lower gear range. That’s more of your real mountain bike. And then you have kind of a gravel or drop bar style bikes, which is for road and dirt roads.”

Even with the growing interest in mountain biking, the hobby isn’t always a cheap one.

“Well, really right off road, you’re going to be $900. The sky’s the limit like any sport or hobby,” Rangitsch says.

“The Black Hills has definitely been discovered. Previous to this COVID explosion, this has definitely been a big boom in cycling in general, nationally and regionally, because it’s something you can do outside, you can do away from people. So that’s, you know, it’s seen big growth. But locally here, if you want to try to find trails, there’s a couple of apps you can get on your phone. One called MTB Projects and one called Trail Forks, and they’re more specific to mountain biking and bike trails.” 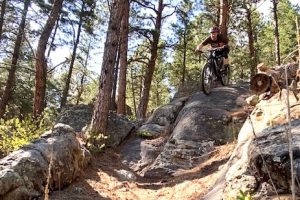 For anyone familiar, new or visiting the area, riding on[...]