Bob Riggio, Chief Meteorologist Emeritus is with Paul Priest, a WWII veteran who has an incredible story to share. Paul served in the Ninth Armored Division as a PFC in Europe.

Priest shares more of his story. “Born in Flint, Michigan. Out here [South Dakota] in 1940. I was drafted. They put me on a tank the first day I was on it. Two days and I wanted out.”

When the captain asked Priest what he wanted to do, Priest said he liked the outdoors and consequently, Priest was put on reconnaissance. “So I went out to find German nests and pictures and things like that. That’s why I took all these pictures.”

There were 12 in Priest’s platoon. He says that they would go out, find out where the Germans were located, what weaponry they had, and come back and report. Priest continues, “Most of the guys got lost every time they went out. I didn’t. And I found my way through anything I can go out that way and find it. So I led the platoon most of the time.”

Priest describes, “It was in the low- in the lower part of the Rhine River. South Germany and the other side was another another town- little town over there. I forgot now. That bridge was the only railroad bridge that was left to drive over with tanks and things. And they [the Germans] had it all loaded up with explosives, but not enough. They was going to blow it because it was the last bridge.  And no one- no way could we get into Germany. They loaded up with jam ammunition, but with explosives. But the first batch wasn’t enough. It didn’t do any good to the bridge. They bombed and machine gunned the bridge so much that it wasn’t funny. I mean, and it just… just shook it.”

The purpose of blowing up the bridge at least for the Germans, was to keep the allies from crossing the Rhine River.

So they decided to take the bridge. “We decided to go ahead and advance and try to get the bridge. On the other side on a hill was 88 cannons.  I mean the Germans, you know. And they was firing down on us if we got any close to it and- to the town. And after we got across the bridge it was hardly any fighting over there. They just backed up and moved out- started leaving. But the biggest thing of our problem you see on the other side was a tunnel and that’s where the troops was hiding back in there.  We didn’t know what was in that tunnel. We had to take that bridge to get that tunnel cleared and get over on the other side. Now, the one officer gave us 27 minutes to go from Remagen to the other side of the bridge. We made it a little longer than that, but I mean it was pretty close to it.”

The Germans were still firing as they were trying to cross. There were two towers that “Had machine guns on it from the Germans and the Germans opened up on us from those machine guns and they right down on a bridge, and they were firing right into the bridge, you couldn’t see it. So that was the Rample Spark going across the bridge from pillar to pillar. But we didn’t go at first because they blew a hole in the ground big enough that we couldn’t drive a tank or anything else over. So we hid in that hole for a while until they decided to go. So we finally took off and went from pillar to pillar across the bridge. I was in the first group. I’m the last one in the first group. But all the men within the first group is gone now except me. I’m the only one left.”

Priest had a job to do…to cross that bridge and find out how many Germans were in the tunnel. Was he scared?

Priest says, “Who wasn’t scared? Anybody tells you they wasn’t scared, they’re crazy! No. I took one chance on a machine gun. That’s where I got myself my silver medal. That was presented to me by Senator Johnson just before he had his stroke. I’ve got pictures of it in my album, and I got pictures of me in Washington, D.C. I’ve survived the Depression with my folks. I survived two and a half years in the service. I survived 74 year or 75 years of marriage. And I’m 96 and I’m still here.”

In part two, Paul Priest continues with his Story Behind the Banner.

After they took the bridge and checked the tunnel, Priest realized that all that was left were older people and people that had been injured. All of the German troops had left.

Paul describes the importance of taking the bridge and keeping it intact. “By taking it and leaving it in tact, we could get tanks and things across the bridge to better get a foothold on the other side, which we did.”

If the bridge had not been secured, Priest says that the allies would have had to wait to build something across the river. However, because the bridge was in tact, the ally troops could cross into Germany in full force.

“That’s what we did after we crossed the river. The Germans just started giving up all over the place. Everyplace you’d run into a bunch of them. They’d throw their guns down. They were done. They wanted to go home. After I crossed the bridge, going up the railroad tracks on the other side were stone walls on the side where they’d just built a railway to it. That’s where I got hit in a helmet with a wooden bullet, and it tore my helmet off, knocked me out. The next thing I remember, two fellows would carry me back under a pass- a bridge. A little old tunnel deal over the railroad. they threw some water in my face and that was it. But I never drew a drop of blood.”

Riggio clarifies, “And the Germans used- correct me if I’m wrong. The Germans use wooden bullets because they didn’t want to kill the enemy, the allies.  They just wanted to wounded them, but that way they’d have to take the wounded back. So that would just eliminate instead of one, three.”

Priest says, “Actually, wooden bullets and things like that…They used everything towards the end of the war. Your artillery was loaded with nails. Nails, bolts, anything they could get into. That’s what they were shooting.  That’s the way it was going to the Ardennes Forest. It was more dangerous with the trees coming down, than it was with bullets.  Because they were shooting into the trees, which was causing the trees to blow apart. And you was getting hit by splinters of wood.”

Priest still has the camera that he used to take pictures. “I still got the camera that I took all the pictures with. People said, ‘How did you get the pictures and take and get them developed over there?’ Because when I took them back, they didn’t care about that. This fellow developed the pictures and give me new films all the time. So I just took pictures every time I went out. “When you’re running a reconnaissance, you don’t run and make a lot of noise. Because I never carried a rifle. None of my men carried a rifle.  We all carried pistols.”

It was Priest’s job to verify that the bridge was safe for the allies to cross. Priest continues, “My idea was they sent me out there to go and see where the explosives were mounted and how much there was and underneath the bridge there were lots of explosives. They had them all over underneath it. The ammunition didn’t seem to cooperate. It was faulty ammunition, but they tried bombing it. They tried machine gunning it. They tried everything. And it just jolted it. It did knock off some of the bridge, but not very much. It was a railroad bridge, and they’d filled it in between the tracks with planks. Big wide planks like that. And that was where most of the damage was, was those planks.

Priest explains that after they took the bridge, the Germans surrendered. “We took the bridge on March the 7th. But I think they surrendered in the March-April? It was in April. The first part of April. I don’t know the exact date.” 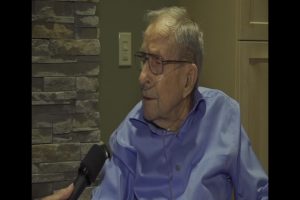 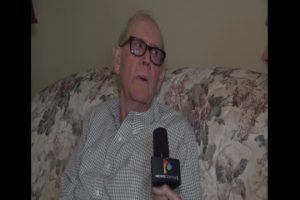 Richard Parham, a WWII veteran, shares his story about[...] 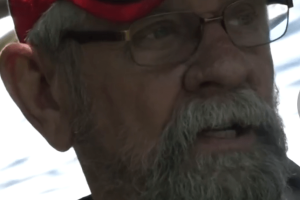 Bob Riggio meets with David Gates, a Vietnam veteran, who[...]