FALL RIVER COUNTY, S.D. — Different long guns utilize different ammunition, and certain rounds are used strategically depending on the target. As South Dakota Game, Fish and Parks Officer Chris Dekker explains, a rifle may be used for hunting or for target practice, and you’ll want to use different ammunition for each.

As far as different rifle rounds go, “there are .22 versus our .30-06…with our .22 today, we’re using a full lead round. That’s a great target round if we’re going to be out on the range. If we’re going to be out hunting with it, we’re going to use a hollow point- that’s going to be a more effective round. With the .30-06 here, we’ve got a soft nose round. And so, again, what that’s going to do when it hits a target, it’s going to expand. I could have a full metal jacket round for this .30-06 as well. But with this, this weapon, it’s an actual hunting rifle, and so when I practice with it, I’m going to use the round that I’m going to be using when I’m hunting so my gun is dialed in for the round I use all the time,” Officer Dekker says.

Shotguns also utilize a variety of rounds, depending on the firearms and what you’re using it for.

“We’ve got our 20 gauge round and that’s used in the brake action there…it’s a smaller round,” adds Officer Dekker.

He also says that it’s easy to figure out what round you’re dealing with, explaining that “you can look on the bottom of your shotgun round and it’s going to have that stamped on there…and then if you look on the side, it’ll talk about your length and then what you have in there for shot.”

Officer Dekker also talked about 12 gauge rounds, which came in the rifled slugs and buckshot variety.

“So the difference between these two rounds, the rifled slug is very much like a rifle round. It is a large chunk of lead that’s going to go downrange, just one solid projectile…the buckshot is going to be several small pellets…little 38 caliber pellets. You’ve got about seven or eight of those that are going to go downrange, and they’re going to spread out to some extent and they’re going to hit the target again…that slug can be effective out to about 100 yards pretty accurately. These buckshot – 50 yards, you’re getting kind of out there for buckshot.”

If you’re hunting smaller game though, there’s a 20 gauge round that will work a lot better than rifled slugs or buckshot.

“We’ve got 7.5 shot. This is a great small game round. This is something that you would use if you’re out rabbit hunting maybe, or if you’re dove hunting. It’s a great dove load. And what that is, is just a bunch of tiny little BBs, and so that round is full of them. That’s going out there and creating a cloud of shot that is going towards the target.” 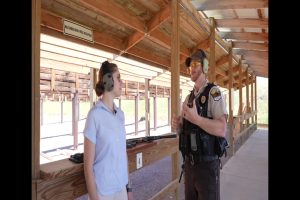 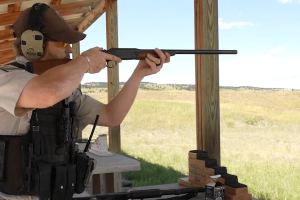