ALBUQUERQUE, N.M. — When the going gets tough, Jeremy Sandoval and his best friend Daniel Valencia, get going.

Most afternoons, Sandoval sets up shop near Tramway and Copper to sell candy from the wagon his grandpa bought him.

“We saved for about two months to get the stuff that we have today. Pringles, water, coca-cola, peanuts all for a dollar,” Sandoval said.

The money earned, however, doesn’t go into Sandoval’s pocket.

“So me and my sister, we were sitting there one day in the living room. We were wondering ‘How can we help my mom?’ Well she’s my cousin, but I call her my mom,” Sandoval said.

One day, Sandoval’s sign caught the attention of Marcos Rivera.

“I was driving home and I saw his sign that says ‘Trying to help my mom with bills,’ and I think anybody that would see that sign would flip a u-turn and come back and buy some snacks,” Rivera said.

That’s exactly what Rivera did. He ended up purchasing Sandoval’s entire inventory.

“It shows, like, he’s doing what needs to be done to help his mom,” Rivera said.

Sandoval said things were tough for him when he was younger.

“My birth-mom she was always like down and depressed and we couldn’t really help her because she refused the help. And so, we were like, OK we didn’t know what to do, and she passed away and my cousin and my auntie came along,” Sandoval said.

With an aunt with health problems and a cousin trying to provide for the household, Sandoval and his sister decided to take action.

“We did this like two times before she found out and so when we went home we had about maybe, I think 115 bucks. The first two times we did this, and we gave her the money, and she said, ‘Where did you guys get this from?’ And I told her to go into the living room and you’ll see our cart with our snacks and stuff. And she was like, oh ok, and she went in there and couldn’t believe it. And her mouth dropped and she cried and she was saying how this was really going to help her out,” he said.

Sandoval said he doesn’t care if people criticize him for being young and selling things on the street.

“They don’t know the value of what me and my family had been through and what we had to go through to get to this point,” he said.

Despite all the life the 13-year-old has lived, he’s grateful.

“I’m very thankful for it, and I’m thankful for having a roof over my head and having new clean clothes on my body every day,” he said.

Sandoval said his dream is to own his own food truck one day and has plans to keep selling until he gets there. 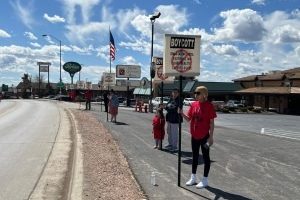 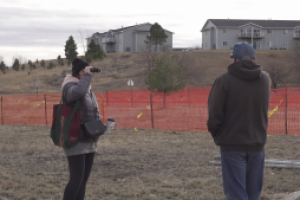