The Story Behind the Banner; Loyd Brant

In a couple of months, The Veterans Banner Project will begin to hang banners all over Rapid City on utility poles. And the veterans that are honored on those banners have stories to tell.  One veteran being honored is Loyd Brant.

Brant had six brothers who all voluntarily joined the Marine Corps during WWII. Brant and his brothers chose to join to protect the United States from the Japanese. Brant explains, “The first one joined in 1937 just before the war started. He got out. His four year enlistment was up just before the war started. So he got out of the Marine Corps. When he got out, the rest of us joined the first. The first one joined in January 1942 right after the war started. His name was Kenny and after he joined, Laverne joined the next brother. The next one was Herbert Brandt and after he joined my twin brother and I joined in 43. I was in a Amphib Recon battalion. We were Special Ops. What they called Special Ops back in those days. They would be Special Forces today.”

Brant continues, “We had to we had to battle surf to get to some of those islands. But the purpose of our landing on these islands was to get intelligence for the assault troops. Started out in the Marshall Islands. Next came Saipan and Tinian. They were three miles apart. Saipan had 35,000 Japs waiting for us there and Tinian had 8000 Japs on it. The work we did on Tinian saved probably a thousand Marine lives for the work we did there. Then we landed at night. There were swimmers in our group that were qualified to do this for that particular landing. There was probably about 20. They picked out landing beaches where the Japanese didn’t think we could land. When we picked those landing beaches out, it was with the idea of landing a Marine division on them. The Navy said, ‘No, you can’t do that. It’s impossible. The landing beaches are not suited for that kind of work.’ So the Marine Corps had to fight the Navy to get this done and the Marine Corps won. They landed one division plus a couple regiments of another division. Thousands came around from where they were defending…where they were expecting us to land. And so our fourth Marine and second Marine divisions met them and annihilated them.” 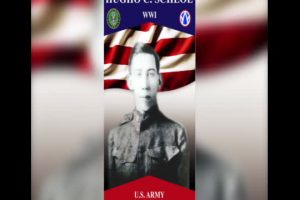 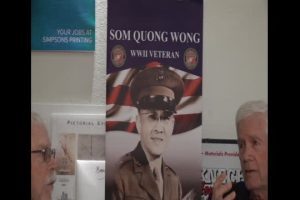